Last month we discussed how to calculate winter hay needs. Besides the fear of not having enough hay in the barn for winter, probably one of the next greatest fears for those dealing with forage is barn fire caused by improperly stored, excessively moist hay. It seems improbable that something as inanimate as hay can simply combust, but hay is anything but inanimate. Within the depths of a bale, particularly a bale that has been harvested when too moist, fungal and bacterial microorganisms grow. This activity can cause a dangerous rise in temperature in a bale. Let’s discuss some ways to deal with overly damp bales and how to prevent their moisture levels from being too high in the first place.

Moisture levels can be easily tested with a moisture reader that is specifically designed for testing hay.Hay can be tested in the windrow before baling by densely packing hay into a 5- to 10-gallon bucket and then measuring it with the moisture probe.This should be done in several areas of the field. Hay should not be baled until the highest moisture reading is below desired levels. Once hay is baled, bales can be tested throughout the field to test moisture levels before storing them in the barn. If there is any concern about the moisture of the hay in the barn, levels should be monitored over the next 3 weeks.

For those doing smaller baling jobs who don’t want to invest in a moisture reader, there are a few acceptable though somewhat less reliable techniques for determining if hay is dry enough to bale. One way is to find the thickest part of the field and flip the hay in the windrow over by hand. If the hay underneath is green and/or at all moist to the touch, more drying time is needed. Another trick is to give various samples throughout the field (paying attention to the undersides of windrows) the quick “twist test”. To do this, simply grab a fistful of hay and twist it with a circular motion. If the stems break easily, the hay is cured. If it bends, it is not. Also, hay that is dry enough to bale should sound like crumpling paper when worked with. The caveat with these methods though is that by the time they work, the hay may be overly cured. Time and experience baling make it easier to use these tools to their advantage.

If bales are suspected of being wet, they should be stored outside for at least 3 weeks—the period of time that microorganism activity will be the highest. Bales should be stacked loosely and preferably on pallets or railroad ties to keep them from absorbing additional moisture from the ground. Making sure the stack is in sunlight is also a good idea. They should not be placed next to even more flammable dry hay. Once moved into the barn, bales should be stacked in a pattern that promotes ventilation and air circulation.

Hay that has been harvested when at all wet, should be carefully monitored once in the barn by using a hay moisture reader. While it is normal for hay to heat up over the first three to seven days to roughly 130 degrees, the temperature should then decrease. If this doesn’t happen and any bales begin to measure over 150 degrees, they should be checked daily. Bales over 175 degrees need to be checked every two hours. If internal bale temperatures reach 190 degrees, combustion is imminent, and the local fire department should be put on alert.

It has been somewhat common practice in the past to salt bales to reduce moisture levels. This is done by sprinkling salt between layers when stacking. While this might help reduce spoilage and mold growth to some degree, this is not a dependable tactic for preventing combustion. To reduce flammability, bales would have to be salted at amounts that would make them completely unpalatable. Other tactics like pumping dry ice, liquid nitrogen or carbon dioxide into moist bales have been proven ways to prevent combustion by eliminating oxygen. However, this practice would be beyond the scope of most smaller farm operations.

Not only are moist bales at risk of combustion, but such bales are also less nutritious. Studies have shown that overly-heated bales decrease in digestible nutrients by upwards of ten percent. Thus, the concentration of total digestible nutrients decreases while undigestible fiber is increased. These factors need to be considered when evaluating the nutritional value of heated hay. Furthermore, moist hay is often synonymous with moldy hay. Moldy hay can cause mycotoxins to build up within the bales which are toxic to animals at high levels—especially horses. Care should be taken when feeding out such bales.

“After all this is said, the best way to deal with wet bales at harvest is to prevent them in the first place. One way to do this is to allow for sufficient drying time for cut hay.” 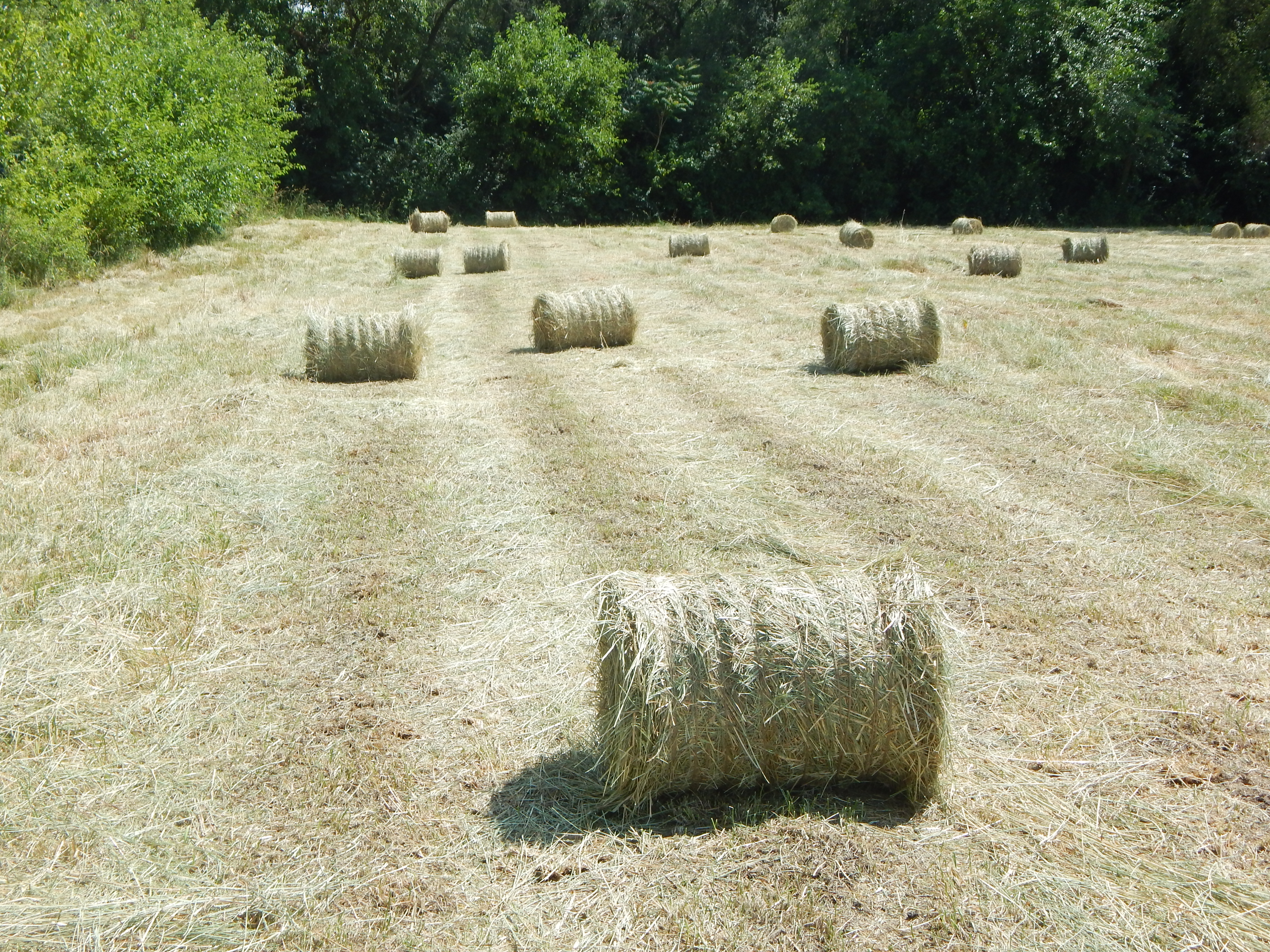 Of course, this varies by climate, but a good rule of thumb is three hot sunny days. Humid areas may require more time, arid less. Another way to promote drying is to use a mower/conditioner when cutting hay. This machine not only cuts the hay but is designed to spread the hay out as it cuts rather than allowing it to windrow like a traditional mower does. Using a tedder to spread cut hay is also an effective method. Belt rakes are especially handy for this purpose since they are a 2-in-1 implement. These machines not only rake hay into windrows as their name implies but can also be used to ted hay with the simple removal of a hay stop.

In conclusion, no one likes to deal with wet bales. However, surprise rain showers and impending inclement weather can sometimes force one to bale when moisture levels are higher than recommended levels. Hopefully we have given you some tricks for dealing with the problem and even some ways to prevent the issue in the future. May you have plenty of hay safely stored in the barn as you begin planning for the next growing season!