Mini Round Balers for Pine Straw

With December and the holidays in full swing, pine trees are on many people’s minds. Therefore, it seems to be an appropriate time to discuss an alternative use for pine trees. Many may not realize it, but the southeastern United States is home to countless acres of pine tree forests which are managed not only for their timber, but also for their needles. Even evergreen trees such as pines go through an annual shed. These shed needles are then baled and marketed for many uses including landscaping and erosion control. Pine needles make a wonderful mulch for garden beds and adhere well to slopes thus protecting against soil loss.

Though traditionally most pine straw has been baled by hand with pine straw box balers such as the one pictured here, many producers are making the switch to mechanized tractor-powered balers. And while most people are accustomed to balers that produce square bales, many are finding that compact balers which produce small round bales are the most economical and efficient to use for pine straw production. They are also finding that mini round balers, with their compact size, are perfectly suited for maneuverability between tree rows in pine stands. For that reason, this blog will focus on the advantages of using mini-round balers.

One of the biggest reasons pine straw producers are turning to mechanized baling in general is a lack of dependable and affordable labor. More and more, producers are having trouble finding labor to help get the straw out of the woods and baling by hand is an extremely labor-intensive endeavor. Commercial pine straw production is very seasonal; therefore, producers also must consider that their help may not return for the next season. Most of the workers in the industry are immigrants who are willing to do the grueling work for very modest pay and replacing them may be problematic especially in today’s political climate. Staffing properly during the boom months can be difficult, and since laborers are only needed for four to six months in most cases, they are let go every year and rehired. This creates an endless human resources hassle.

Every producer should go through the calculations to see if switching to mini round bales makes economic sense for them. The situations vary for each producer. Here are some guidelines: 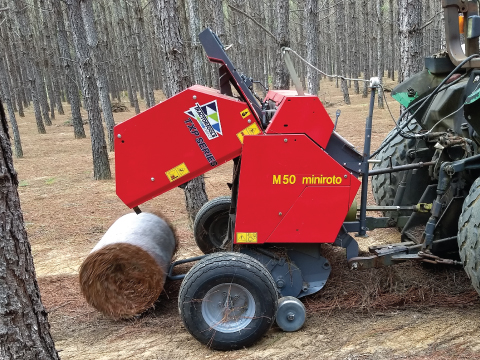 Producers who are used to baling by hand may worry that a mechanical baler will not pick up all the straw. There is no doubt that collecting the straw by hand assures that you can get every needle into the bale. However, hand-tied square bales are often loose, and a lot of straw can be lost in transport. Though a mini round baler does require some experience to maximize efficiency, it is a completely adjustable machine that allows you to set the height of the pickup tines off the ground, the speed of the tines, and the density of the bale. Once the machine is set up correctly, and the proper windrow size is perfected, it can be extremely effective at picking up the straw while leaving behind everything else. Once wrapped with netting, the bale is firmly held together and holds onto needles even when handled repeatedly.

Since so much of the prep work for pine straw baling must be done by hand, some producers question why they should mechanize the baling part of the process. It is true that regardless of whether a mini round baler is used or not, there is a lot of manual labor involved in producing pine straw. Woods must be cleaned of sticks and cones. Needles need to be raked from between the trees into the middle of the rows, and bales need to be collected by someone. However, using a mechanized baler frees up the laborers who were doing the hand baling to tackle these other jobs and thus greatly increases efficiency of the entire process.

Mini round balers have become a fantastic option for pine straw operations to increase their production and, as a result, their earnings. Who wouldn’t want that? Too bad you can’t use one to clean up the needles in your living room after the holidays, huh?